Last night I watched a little kid trying to skim board.  He must have wiped out a million times, no lie.  But every time he wiped out he just went out and wiped out again.

Some of these wipeouts were pretty spectacular, too, I must say.  A few times I thought he would come out limping and crying.

But he didn’t.  He just kept draggin’ his little body back to the shore, and prep for another run at it.

He was hanging with the big dogs, too—older boys who seemed to accept him into their pack of skim boarders.  They didn’t laugh at him or condescend in any way.  They seemed to take it as the norm that if you wanted to learn to skim board, you had to be willing to bite it.  A lot.

It reminded me of playing badminton with Jack Renner.  Last Fourth of July, Jack Renner, a second grader, and I “played” a game of badminton.  He couldn’t serve the birdie over the net to save his life.  He must have whiffed that thing a thousand times.  It was painful to watch.  But he did not give up.  He was okay with failing, but he was not okay with giving up.

I am trying to get comfortable with failing.  It’s one of the things I hate to do.  I tend to be a “giver-upper,” and the older I get, the more slack I give myself, saying stuff about “old dogs and new tricks.”  But that’s BS, and everybody knows it.

There’s a Zen saying that goes, “Fall down seven times, get up eight.”

Here’s the Skim Board “pack” with their “pup” (fourth from the left): 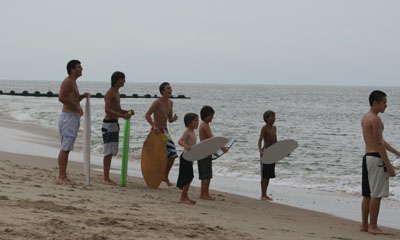 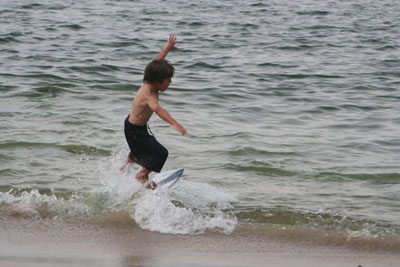 Here’s a rather “tame” wipeout: 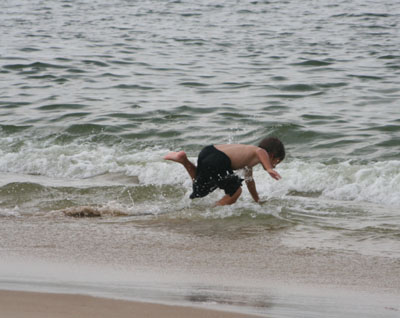 I loved this kid.  Could not stop watching him.  He’s a Guru.

I love to teach yoga. I love having written. I read a lot of self-dev books and books about neuroscience. I like to drink really lovely red wines. I love to have conversations with people who read books. View all posts by Kath Thompson