At first, Ireland looks a lot like northern Pennsylvania, albeit with a few more sheep. But then suddenly, smack-dab in the middle of this sheep field, sits a castle.The brain goes: Wait. Castle?

It’s huge, this thing, and it’s standing here in this sheep meadow, and I’m looking at it from the window of a tour bus with wifi.

Ireland has so much history. Which sounds stupid to say because everything has history, but this history involves Vikings for goddsakes. Vikings, and invasions, and competing god-stories, with the whole mess needing to be fortified and defended and protected.

And rocks are involved. Many rocks. From what I could see, Ireland is basically rocks. Rocks and stones and sheep.
And they’re old, these rocks. And the people of Ireland still have this smell of old on them. Even the millennials with their cigarettes and tight hipster clothes. There’s something sheepy and rocky about them. They seem shy and polite on the outside, but I always thought I could hear something a little edgy, and pointed, and don’t-mess-with-me underneath their lilt.
There’s this constant push-pull of past and present in Ireland. It’s in the road signs in Gaelic, and the narrow medieval streets with their lines of colorful chock-a-block houses, and then out of nowhere, a Tommy Hilfiger store.  Constant reminders of battles, and the urgent need to fortify and moat things, and then: Modernity.

But there’s never getting away from the rocks.
Rocky meadows, and grassy fields defined by them, and cliffs made from them. Abrupt stone castles erupting, without warning, out of the soft grass on top of them. Green grass, soft and sheepy.
Herds of sheep sleeping together, surrounded by low, sharp borders of rocks to keep them in and protected. And maybe to keep other things out? What other things? I don’t know.
So all week, we zoomed around in a big bus with our foreheads against the glass  listening to guides tell us what we were seeing. “Coming up on the left, you will notice a field.” (That was a guide joke.) Many stories of Vikings and invasions. Many cemeteries with graves marked with those ubiquitous rock Celtic crosses.

Whole families buried together. And lots of those graves had new flowers, and signs of recent attention and love and tears and pain, still clinging to them. 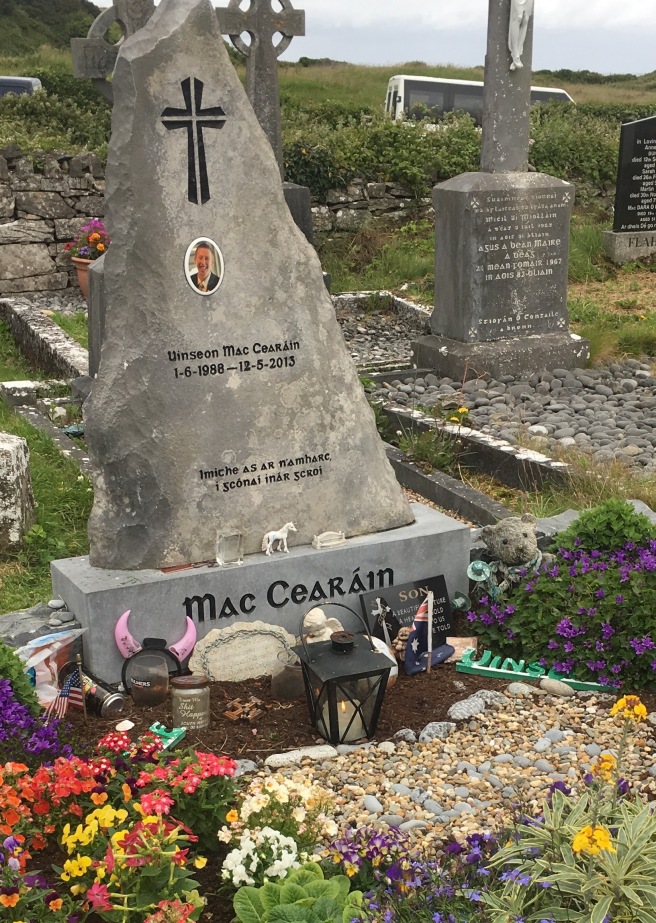 We toured the ruins of many things made of ancient rocks. There were places where we were asked to imagine that this was the cooking area, and that the latrine.
We went to the castle where the movie Braveheart was filmed.

I’ve never seen Braveheart, but it wasn’t hard to imagine that this place would be a casting director’s wet dream. Old. Authentically old. No power lines or any anachronisms to fuck up the scene. You could easily imagine the tips of arrows peeking out of the little slits in the castle wall, or see a right-handed soldier beheading the enemy at the top of a spiral staircase. Blood everywhere. Fires for signals, and cooking, and pyres.

And then, back in town, battle won: whiskey. To toast the dead, to celebrate victory, to numb pain, to douse memories. Memories to be remembered in songs sentimental and dripping with pathos. Songs sung loudly, full-throatedly, drunkenly.

Ireland is old. The food is basic, the sweaters warm, the streets narrow, the vibe friendly. It was pleasant to be a tourist in a place where tourism is the cornerstone of the economy and nobody forgets it.  Tourists are not put up with, they are thanked, desired. Free shipping! Send those bulky sweaters home–on us! We realize you don’t have room in your fancy luggage–no problem!
But in the end, when I remember Ireland, I will remember the rocks most of all.
“And now we are returning to the medieval city of Galway,” announces our tour guide as we roll our ridiculously huge bus down a street that can barely contain it.
I suddenly hear the word “medieval” as if for the first time, and all the images of Ireland I’ve been collecting all week, fit into place in my mind like an ancient puzzle coming together. A puzzle like an ancient stone wall.

I love yoga. Teaching and doing. I like to write, but I want to edit much more. Tragically, in order to have something to edit, you have to write something first. I try to scribble 1K words a day in Scrivener. I like wine. My favorite thing in life is having great conversations. I love to share ideas. Good conversation is becoming a lost art, though. If I don't do some yoga, meditate, and read and write every day, things really fall apart. I wish I would post on this blog more regularly. I'm going to work on that. View all posts by Kath Thompson

January has five Mondays. You've only missed one. Let's do this. https://main-street-yoga.heymarvelous.com/calendar
We picked our words! Mine is MUSCLE and G’s is VIGOR. Look out 2023, here we come!
You don't do yoga for you. You do it for your kids, your parents, your co-workers, your partner---everyone you connect with during your day. Everything goes better when you're calm and present. You know it's true. So, do it for them. Every Tuesday, there's a Gentle Yoga class at 5:30. So why don't you stop. Breathe. And take an hour to remember what's truly important. https://main-street-yoga.heymarvelous.com/calendar
November 30: Let's end this month with a practice you could do everyday, it's that wonderful. Bookmark this one. Memorize it, and make it your own. If you've been playing along all month, congrats! You completed thirty days of yoga. Now keep the streak going!