Now I am a serious blogger. I know this because I am posting from Gate D2 at the Charlotte Airport (CLT). I am feeling all bloggerly as I sit cheek by jowl with a whole buncha other people waiting for the (delayed) flight to Philly.

Left Florida this morning. I liked a lot of what we did there but ultimately I am not a “Florida person.” Too little diversity, too litttle energy, too little friendliness. Florida needs something. It needs a soul, or something. It seems tired. It looks pretty, though. The weather tropical and Hemingway-esque, but the people are wrong.

By 10 PM we will be back in Tioga County. Another place where the people are wrong. (Where are the people right? I don’t know. Possibly nowhere. ) As we flew over Charlotte I saw pine trees. Pine trees are good.

I finished the novel, Euphoria last night. It was okay. I’d give it 3.5 out of 5 stars. It bothered my sleep, so that’s something, right? The story infiltrated my subconscious. I wish I was a storyteller.

On the plane here to CLT G was crying over her book. I am trying to think of the last novel I read that had me in tears, and I can’t.

At first, Ireland looks a lot like northern Pennsylvania, albeit with a few more sheep. But then suddenly, smack-dab in the middle of this sheep field, sits a castle.The brain goes: Wait. Castle?

It’s huge, this thing, and it’s standing here in this sheep meadow, and I’m looking at it from the window of a tour bus with wifi.

Ireland has so much history. Which sounds stupid to say because everything has history, but this history involves Vikings for goddsakes. Vikings, and invasions, and competing god-stories, with the whole mess needing to be fortified and defended and protected.

And rocks are involved. Many rocks. From what I could see, Ireland is basically rocks. Rocks and stones and sheep.
And they’re old, these rocks. And the people of Ireland still have this smell of old on them. Even the millennials with their cigarettes and tight hipster clothes. There’s something sheepy and rocky about them. They seem shy and polite on the outside, but I always thought I could hear something a little edgy, and pointed, and don’t-mess-with-me underneath their lilt.
There’s this constant push-pull of past and present in Ireland. It’s in the road signs in Gaelic, and the narrow medieval streets with their lines of colorful chock-a-block houses, and then out of nowhere, a Tommy Hilfiger store.  Constant reminders of battles, and the urgent need to fortify and moat things, and then: Modernity.

But there’s never getting away from the rocks.
Rocky meadows, and grassy fields defined by them, and cliffs made from them. Abrupt stone castles erupting, without warning, out of the soft grass on top of them. Green grass, soft and sheepy.
Herds of sheep sleeping together, surrounded by low, sharp borders of rocks to keep them in and protected. And maybe to keep other things out? What other things? I don’t know.
So all week, we zoomed around in a big bus with our foreheads against the glass  listening to guides tell us what we were seeing. “Coming up on the left, you will notice a field.” (That was a guide joke.) Many stories of Vikings and invasions. Many cemeteries with graves marked with those ubiquitous rock Celtic crosses. 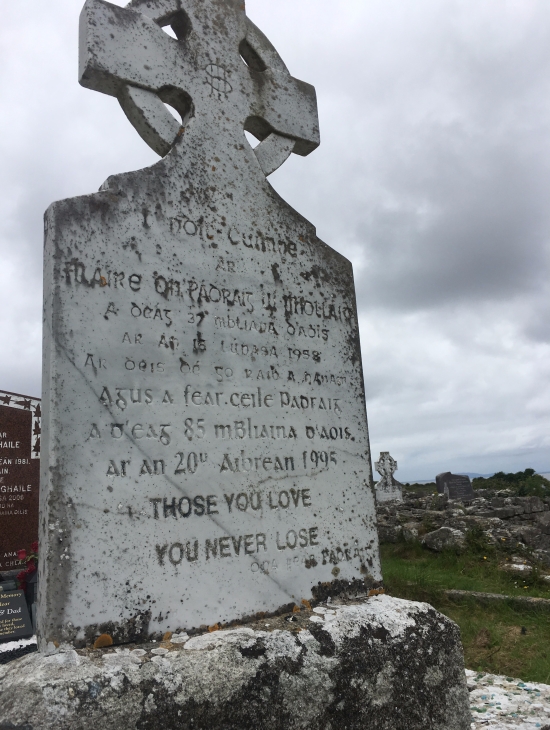 Whole families buried together. And lots of those graves had new flowers, and signs of recent attention and love and tears and pain, still clinging to them.

We toured the ruins of many things made of ancient rocks. There were places where we were asked to imagine that this was the cooking area, and that the latrine.
We went to the castle where the movie Braveheart was filmed.

I’ve never seen Braveheart, but it wasn’t hard to imagine that this place would be a casting director’s wet dream. Old. Authentically old. No power lines or any anachronisms to fuck up the scene. You could easily imagine the tips of arrows peeking out of the little slits in the castle wall, or see a right-handed soldier beheading the enemy at the top of a spiral staircase. Blood everywhere. Fires for signals, and cooking, and pyres.

And then, back in town, battle won: whiskey. To toast the dead, to celebrate victory, to numb pain, to douse memories. Memories to be remembered in songs sentimental and dripping with pathos. Songs sung loudly, full-throatedly, drunkenly.

Ireland is old. The food is basic, the sweaters warm, the streets narrow, the vibe friendly. It was pleasant to be a tourist in a place where tourism is the cornerstone of the economy and nobody forgets it.  Tourists are not put up with, they are thanked, desired. Free shipping! Send those bulky sweaters home–on us! We realize you don’t have room in your fancy luggage–no problem!
But in the end, when I remember Ireland, I will remember the rocks most of all.
“And now we are returning to the medieval city of Galway,” announces our tour guide as we roll our ridiculously huge bus down a street that can barely contain it.
I suddenly hear the word “medieval” as if for the first time, and all the images of Ireland I’ve been collecting all week, fit into place in my mind like an ancient puzzle coming together. A puzzle like an ancient stone wall.

She was really nice, but seemed to be a bit untethered.

The way I feel today. Neither here nor there. Piles of laundry litter the top of the stairway, waiting to be sorted and dragged to the basement for the laundry fairies.

There are 2 editions of the Aggravator to be gone through as quickly as possible, and mail to catch up on, and a ventilation issue at the studio to fix.

All want is to sit and stare  and give my ears a chance to stop ringing.

G came home sick. Sore throat, head, ears and sinuses cemented shut. She didn’t go to work (but mowed the front lawn) and tried to tough it out without resorting to OTC symptom relief, but finally caved.

I taught Happy Hour Yoga. It always feels new and shiny even if I’ve been away this long.

Blogging on the IPad is ok, but it was really frustrating because I don’t know how to link to things without it taking forever, and my pictures took a long time to show up in my stream.

So tonight, in honor of transition night, I will add some random pictures that I wanted to post but couldn’t get to load.

This is G backpacking Obie through the Japanese Gardens.

This is Obie making friends with the evil arbor roses.

And yeah, that’s me on the flight home.

If the weather is supposed to do what they predict, we’ll all be sitting here working cerebrally.

Japanese Gardens and Ice Cream were the featured activities of the day.

I want the Japanese Garden all to myself for just an hour every day.

I really don’t think that’s too much to ask.

I want to sit meditation in either the raked gravel garden or on the hidden bench in the moss with the view of a small stream, or in the Tea House.

They move slowly and quietly. They stand and watch.  They are not tourists. Yet they are.

After lunch we went to Salt and Straw which serves quirky ice cream flavors like Tahini and Cardamom, Honey Lavendar, and Cinnamon Snickerdoodle. G got a flight to taste a bit of 5 different ones. I got a float made with Stumptown Coldbrew and  Double Fold Vanilla. My god. That’s all I have to say.

Then it was back home for some cocktails and a Uke lesson from Scott and a strumming lesson from Obie.

We ended the evening with a walk around their neighborhood. This is the view of Mt Hood taken a few streets over.

(All the photos the past few days were taken by G, who did me a total solid by taking and sending me pics throughout the day so I would have someting to post here other than words, which refuse to cooperate after long days of Portland happiness..and Gimlets.)

Tomorrow we go into Airport world and fly back.

We left our great VRBO in Pacific City this morning, but last night we watched the sun set into the ocean (which is unusual for us East Coasters who only see the sun rise over the ocean.)

It was cold out there, at least for me who has the blood of a snake. But well worth it, especially going back home to Cooper Mountain Pinot and a fire in the firepit, and s’mores. 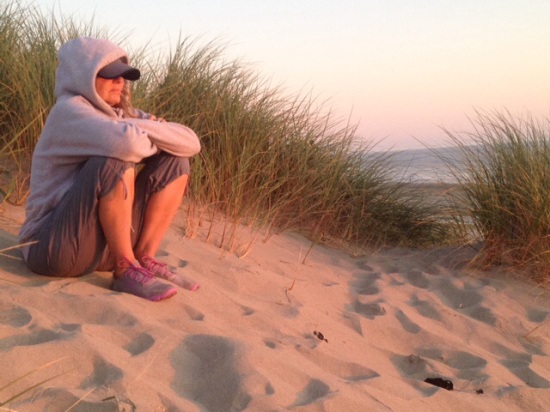 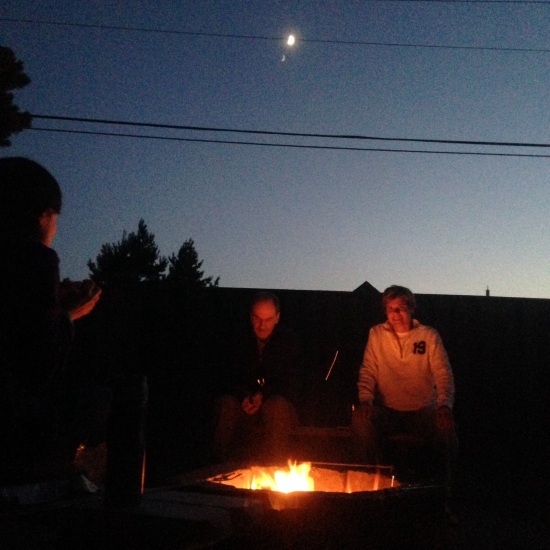 And this morning we strolled Obie to the coffee shop and stopped to say goodbye to the sand on the way home.

Back in Portland we went to the Food Trucks for lunch. G and I had Nasi Goreng which we haven’t had since Bali  and it was delicious and the people watching was even better. I love Portland.

After a shower and a napitation, it was back to Em’s for coctails, Corn Hole and cuddling with this one:

The plan for tomorow is to go the the Japanese Gardens, and then to Salt and Straw for ice cream. It is hot here in Portland, and this weekend is supposed to set records here.

On the beach this morning a man was making bubbles:

Obie had never been on sand. He is not a fan:

G stayed with Obie while Scott, Emily and I climbed the dune. We are the 3 little dots on the left at the top:

We flew the kite, which actually flew itself.

And G had the mandatory “Outlaw tequila.”

We think the baby has pink eye. No picture of this. I read him a magazine. There were pictures of cats in it. I am a good meower:

Now it is time to watch the sun set over the Pacific and have a bonfire and eat s’mores. Those pics tomorrow, when we leave here and return to Portland.

Pacific City is horsehoes and ice cream and Farmers Markets and fire pits.

Pacific City is the US Open and gimlets and burgers on the grill.

This is me practicing my  interpretive dance moves in the horsehoe pit.

He ain’t heavy, he’s my grandson.

We are family.  (G is taking the picture.) G has taken all the pictures. I am just learning the “law of thirds.”

Looking for something specific? Search my blog here!

THIS is what I’m talking about, people!
I’ll be at the studio today from noon till 2pm if you want to snag a last minute stocking stuffer for your favorite yogi —or aspiring yogi. Classes are $10 each. Buy as many or as few as you want! All methods of pay accepted. Namaste and all good things for the new year!💕🙏
There’s something about the gray, black and white winter palate that’s oddly beautiful. I just finished my walk with Stella and will now crawl into my sauna bag then spend the rest of the afternoon reading,writing,and meditating. Every season has its own delights.
My fave part of Xmas is lighting up the house, cutting down the tree, and sitting by the fire. Today was cutting down the tree day!! We go to Empire Evergreens and it was really crowded today but we found the perfect concolor fir!